The nominations were announced this morning at a ceremony hosted by Tony Award winners Patina Miller and Bebe Neuwirth at Sardi’s Restaurant, which were streamed live online at BroadwayWorld.

The nominations announcement begins the month of celebrations leading up to the 83rd Annual Drama League Awards, which will be held at the Marriott Marquis Times Square (1535 Broadway) on Friday, May 19, 2017.

Tickets for The Drama League Awards, which includes pre-event cocktails and the star- studded afternoon luncheon ceremony, are available by calling (212) 244-9494 or by visiting dramaleague.org/events/awards.

The Drama League previously announced its 2017 Special Recognition Honorees: the legendary Bette Midler will receive the Distinguished Achievement in Musical Theater Award; Bill Berloni will receive the Unique Contribution to the Theater Award for his work in animal training for Broadway; and Michael Greif, represented on Broadway this season with both Dear Evan Hansen and War Paint, will receive the Founders Award for Excellence in Directing.

First awarded in 1922 and formalized in 1935, The Drama League Awards are the oldest theatrical honors in America. They are the only major theater awards chosen by a cross-section of the theatre community – specifically, by the industry professionals, producers, artists, audiences, and critics who are Drama League members nationwide. Membership is open to everyone; for more information about membership or the Drama League Awards, call (212) 244-9494 or visit www.dramaleague.org.

OUTSTANDING PRODUCTION OF A BROADWAY OR OFF-BROADWAY MUSICAL

NATASHA, PIERRE AND THE GREAT COMET OF 1812

Current Broadway offerings “Dear Evan Hansen,” “Oslo” and “Indecent” are in the running for major trophies at the 2017 Lucille Lortel Awards, the Off Broadway-centric honors that have nominated those titles for their initial Off Broadway stagings last year.

The leaders of this year’s pack of nominations, announced ahead of a ceremony in May, were “Sweeney Todd,” the small-scale revival that turns the Barrow Street Theater into a pie shop; and “Hadestown,” which was a buzzy hit at New York Theater Workshop. Both productions earned seven nominations.

“Dear Evan Hansen,” likely to prove a strong contender at this year’s Tony Awards, is in the running for outstanding musical alongside “Hadestown,” “Ride the Cyclone,” “The Total Bent” and the Broadway-bound “The Band’s Visit.” “Oslo” and “Indecent” — both Off Broadway successes that recently began previews on Broadway — compete in the outstanding play category, along with “Underground Railroad Game,” “Vietgone” and “The Wolves.” 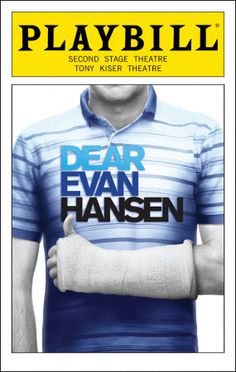 Tickets for Dear Evan Hansen are available for performances through November 2017.  If you purchase on DearEvanHansen.com, you will be able to see which dates have best availability. So go there now and buy your tickets. You can thank me later. Lets see what the critics had to say!

Charles Isherwood, The New York Times: What’s more, this gorgeous heartbreaker of a musical, which opened at the Music Box Theater on Sunday, has grown in emotional potency during its journey to the big leagues, after first being produced in Washington and Off Broadway. Rarely – scratch that – never have I heard so many stifled sobs and sniffles in the theater.

David Rooney, The Hollywood Reporter: The show was already impressive in its lauded off-Broadway premiere at Second Stage Theatre earlier this year, directed with as much vitality as sensitivity by Michael Greif. But the characterizations now seem even more fully lived-in and the connective tissue among the ensemble – whether playing biological or adoptive family, young lovers or high school acquaintances thrust into an uneasy friendship of convenience – has genuine sparks. The entire cast of that earlier production returns minus one, with Michael Park reprising the role he originated in 2015 at Arena Stage in D.C.

Adam Feldman, TimeOut New York: What does it look like when a star is born? In the case of Ben Platt, the astonishing young actor who plays the title role in Dear Evan Hansen, it’s a bit like an actual birth: beautiful but strange and wet, tinged with confusion and danger. Evan is painfully introverted; he has no friends in high school, and even the thought of talking to a girl he likes, Zoe (the poignantly unaffected Laura Dreyfuss), makes his palms perspire. Platt’s performance extends that to his whole body; when he sings, his face often gleams with sweat. Yet the effect is not off-putting; Evan is immensely lovable, even when he makes terrible mistakes. He speaks in rushes of instant regret, as though frantically digging a hole to bury himself in, and his intense awkwardness is filtered through first-rate comic timing, high-wire dramatic acting and a gorgeously expressive tenor voice.

Jesse Green, Vulture: The big problem in writing great musicals is not the difficulty of writing great songs. The big problem is that the songs, great or not, are cannibals, picking the stories clean and leaving a pile of bones. It’s a zero-sum system. In musical dramas the problem is even worse, as innumerable failed adaptations of huge 18th-century novels have proved. (They often seem like Cliffs Notes of Cliffs Notes.) But when a musical drama clicks, an amazing fusion event occurs: The songs and the story enlarge each other in the process of becoming inseparable. Think of Sweeney Todd or, more intimately, Fun Home. And now add to the list Dear Evan Hansen, which opened tonight in a production beautifully directed by Michael Greif. I called the Off Broadway production at Second Stage this May “the feel-anxious musical of the season.” But it is even better on Broadway, so fine in its craft and rich its gathering of themes that, like the best works of any genre, it rewards being seen again – and again.

Melissa Rose Bernardo, Entertainment Weekly: Leaving a new musical with a great song or two running through your head is a rare but exciting thing. Leaving with about 10 great songs running through your head is pretty much unheard of. But that’s the power of Dear Evan Hansen, which just opened on Broadway after a world premiere at Washington, D.C.’s Arena Stage and a stint at Second Stage Off-Broadway.

Linda Winer, Newsday: Finally, there is Platt (the “Pitch Perfect” movies), with his astonishing vocal nuance and his rare ability to communicate bunches of conflicting feelings with just a frown and a hurt, hopeful smile. His portrayal of catastrophic, perhaps autistic alienation is so astute in the early scenes that, when Evan miraculously heals up, we feel a little guilty for missing the old one.

Tim Teeman, The Daily Beast: Given how it loads its dramatic and moral dice, and the swings of tone between comedy and terrible tragedy, the question is what will collapse when the truths are revealed in Dear Evan Hansen. Well, it doesn’t supply what you might expect from some musicals and dramas about teen suicide, our truth-dissembling online worlds, and an extreme case of fabulism. Dear Evan Hansen is beautiful to look at it, slickly directed, and moving, but also biting and subversive-and so may have more to say about teen suicide, parenting, and internet lunacy than the most finely worded op-ed column.

Jeremy Gerard, Deadline: Platt seems more to inhabit Evan than to merely portray him. The halting delivery of soulful lines, the arms that flutter out in birdlike spasms as if grasping for logic or reason and, most of all, with a voice that rises from assured tenor to plaintive falsetto all conspire to bring this character to life. Evan could be cousin to The Glass Menagerie‘s Laura Wingfield.

Steven Suskin, Huffington Post: The formerly promising young songwriters Pasek and Paul, who created an interesting score for Dogfight and a surprisingly accomplished one for the holiday show A Christmas Story, are promising no more; their talent is thoroughly realized with Dear Evan Hansen, one of the strongest scores in years. The songs are not merely tuneful and funny and touching; Pasek and Paul can plumb the inner depths of their characters and rip through emotions in words and music. And as contemporary as their new score is, it should be added that their three musicals have demonstrated that they are equally adept in varied musical theatre styles.

Chris Jones, Chicago Tribune: And what makes “Dear Evan Hansen” yet more extraordinary is how all of the teenage nuance explored so exquisitely by Platt, all of this fledgling character’s hope and hesitation, is baked formatively into the score by Benj Pasek and Justin Paul, a youthful duo I’ve deeply admired since first hearing their score to, all of all things, “A Christmas Story” in Chicago. The link between that retro show and this thrillingly contemporary exploration of the trials and pitfalls of late adolescence is not as distant as one might think.

Joe Dziemianowicz, New York Daily News: The current theater season is only about halfway over. No matter. It’s still a sure bet that when it comes to thrilling and unforgettable moments few will rival the one that comes 15 minutes into the dazzling “Dear Evan Hansen,” at the Music Box Theatre. Yes, that special.

Matt Windman, amNewYork: Benj Pasek and Justin Paul (“Dog Fight,” “A Christmas Story”), a young and extremely promising songwriting duo, have crafted a haunting soft rock score that is neatly integrated into Steven Levenson‘s captivating book. Michael Greif, director of “Rent” and “Next to Normal,” presents a tight and compelling production built around finely-textured ensemble acting and a seamless visual design of shifting panels and floating video imagery. Platt is giving one of the most vulnerable and shaded performances you’ve ever seen. He is terrified, enigmatic and completely believable.

Christopher Kelly, NJ.com: Allow me to be a dissenting voice: Having seen “Dear Evan Hansen” twice now — with its wildly implausible storyline and its repetitive pop-rock score — I am mystified by the enthusiasm for it. Maybe the show’s celebrants are responding to the creators’ willingness to tackle such dark themes, or the admittedly hard-working performance of star Ben Platt (Benji in the “Pitch Perfect” movies), who plays the neurotic title character. But laudable ambitions can’t disguise the fact that nothing about “Dear Evan Hansen” makes very much sense.

Mark Shenton, The Stage: How thrilling it is that Broadway, a place largely turned into a destination to make money not art, is still capable of producing shows that are genuinely bold, daring and confrontational. With Hamilton and the recent arrival of Natasha, Pierre and the Great Comet of 1812, there’s plenty to challenge and provoke already. Dear Evan Hansen adds to New York’s impressive musical slate.

Robert Feldberg, Bergen Record: Viewing “Dear Evan Hansen” a second time, at Broadway’s Music Box Theatre, where it opened Sunday, I found I had much firmer feelings than when I first saw it. When I attended the off-Broadway production in May, it seemed a musical of many parts, some good, others shaky, and I don’t think I fully digested the whole. In my repeat visit, I felt, first, that I had vastly understated Ben Platt’s performance by calling it “affecting.” He’s remarkable.

Peter Marks, Washington Post: “Historic” is an adjective I’ve rarely used to describe a performance, but a review that does not invoke it for Ben Platt’s incandescent turn in the ravishingly bittersweet “Dear Evan Hansen” would be doing it less than justice.

Marilyn Stasio, Variety: The very thought of a Broadway transfer of “Dear Evan Hansen” might chill the blood of theatergoers who loved this bittersweet show when it played in the intimate setting of Off Broadway’s Second Stage Theater. But through the alchemy of Michael Greif, who directed the original productions at Arena Stage and at Second Stage, Broadway’s Music Box Theater proves a perfect fit for this sensitive musical starring a sensational Ben Platt as a neurotic misfit trying to survive senior year in high school. As for the music and lyrics by Benj Pasekand Justin Paul: Not since “Next to Normal” has a score tapped so deeply into the troubled psyche of its needy protagonist.